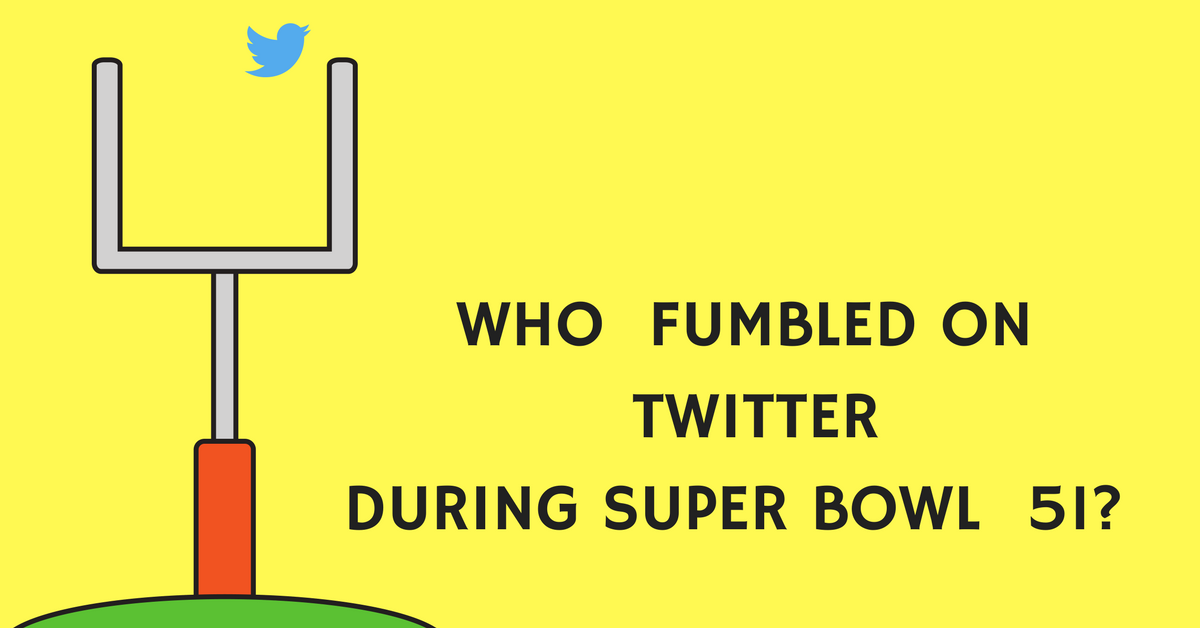 So let’s see, do you actually need an ad to drive conversation around your brand during the big game?
Click Here To Get Your Free E-Book!

For so many reasons but mainly for her ability to use Twitter better than pretty much any other brand out there.

I decided to track Chrissy on Twitter leading up to the game because her husband, John Legend’s song was going to be used in a commercial- I figured she would have something to say about that. But I got more than a bargained for when they actually attended the game. Giving her every excuse to live Tweet game “updates” and for Fox to find them in the crowd.

She does have over 3 million followers on Twitter so it puts her at a bit of an advantage over most brands but her engagement rate is one to be envied.

She posted 17 tweets during the Super Bowl

Her biggest tweet of the night is when she simply tweeted:

Why does everything she says turn to Twitter engagement gold?

If every brand on Twitter started to ask themselves if the content they are producing achieves those three things they might see those kinds of results too.

As much as I believe that Chrissy won the Super Bowl 51 Twitter engagement trophy she technically did not have a commercial. Hmm maybe someone needs to think about putting her in one next year….

So here are our major takeaways for agencies and brands.

And don’t limit this information to what you should do for the Super Bowl. Where else might you be spending money on ads (or content) and could be utilizing Twitter to share and start a conversation about it?

Mr. Clean’s two biggest tweets happened right before and right after their commercial

Each tweet receiving over 1,500 favorites and over 500 retweets on Sunday!

Audi’s tweet mentioning their ad and link to their video was their biggest tweet by far. They received over 24,000 favorites and over 9,000 retweets.

When T-mobile mentioned Snoop and Martha in their tweet after that ad spot appeared they had over 4,300 favorites and almost 1,000 tweets.

When Wendy’s tweeted about their Super Bowl ad they recited over 1,000 favorites and nearly 200 retweets.

It’s crazy that brands like Febreze, GoDaddy and Honda (just to name a few) did not provide links for people to rewatch their commercial on Twitter right after they aired. They missed out on engagement and really sharing the ad- a chance for it to go viral. Not everyone gets an ad the first time around, let alone sees or hear it- so you need to give people a way to easily view it again and again and again. I guess Febreze forgot not everyone can wait for a #halftimebathroombreak.

2. Engage Throughout The Game

I feel like Bai really dropped the ball on this. They had one of the best commercials and early enough in the night that they could have built their social presence by engaging in the game and talking about other ads more. Maybe they were surprised about their success? But come on you have THE Justin Timberlake and Christopher Walken in your ad! And I don’t feel like they were able to capitalize on that through conversations they had on Twitter. They tweeted 26 times, mainly about JT and only got 314 retweets.

Mr. Clean did an amazing job inserting Mr.Clean references into the game and commenting on other brand’s commercials. They tweeted 97 times during the game and over 20 of those tweets got 100 favorites or more. Having a conversation throughout the Super Bowl worked for them and reminded people about Mr.Clean even after their commercial had come and gone.

Another brand who did a good job with Twitter throughout the game was Buick.  Unlike Mr.Clean they did not comment on other brand’s commercial instead, they pre-created Gifs from their commercial and added those images to tweets in reference to game plays. They tweeted 41 times and had over 650 favorited tweets throughout the night.

84 Lumber asked people to continue watching their story online and luckily they stuck around on Twitter to answer questions and comments people had. They tweeted nearly 200 times during Super Bowl Sunday and continued into the wee hours of the night of Monday with thank yous and correcting any allegations that they support illegal immigration. 46 of those tweets were favorited 100 or more times, 4 of them over 1,000 times- so I think people liked what they had to say.

During their commercial, they asked people to follow along and they needed to be around when the questions, support or trolls rolled in and I think they did a good job with it. Don’t create a hashtag, talk about something controversial or ask people to include you in some way while watching the game if you aren’t going to be there to engage back with them.

With ads going for $5 million every thirty seconds, it made a few brands rethink their ad strategy for this year’s game. That’s a big commitment after all and it’s a good time for brands and agencies to consider just how impactful an ad worth that much money could really be. I mean how do you even justify your ROI on something like that?

Doritos has been a part of Super Bowl Sunday for nearly a decade yet this year they stepped away and I think they 100% could. However, I was surprised they barely even engaged with the Super Bowl on Twitter. People were wondering where they were and I think this could have been an opportunity to have a team working behind the scenes looking for moments to talk about Doritos. However, maybe I am wrong. They only had 6 tweets during the Super Bowl and one of them was favorited almost 3,000 times and retweeted over 300 times (granted they got a little help from an Amazon ad).

That’s more than Coca-Cola, Wendy’s, Kia, Febreeze (and so many more brands) highest engagement tweets during the Super Bowl and they all had commercials that aired during the game. So speaking of ROI- that’s looking like a pretty big return for a lot less work.

Then there is Verizon, who took a different route. I don’t think too many competitors have wars like the cell phone networks and the Super Bowl was no safe zone for any of them. Version did have a team working behind the scenes trolling T-mobile and Sprint all night long, two brands who paid to have ad spots in the Super Bowl while Verizon did not. So if we were to turn to Twitter engagement to pick a winner, it looks like Verizon did it.

Their most popular tweet was a dig at T-mobile:

T-mobile’s biggest tweet was after the Martha and Snoop commercial and was favorited over 4,000 times and retweeted almost 1,000 times. While Sprint’s tweet with the highest engagement only had had 216 favorites and was retweeted 151 times.

There is so much we could say about all the data we collected on the brands that impacted Twitter during the Super Bowl. However, we think these are the 3 best takeaways! These are things you should consider when you are deciding to do any type of big marketing or ad spend with your brand.

We hope those who participated in the Super Bowl are looking at their data in some type of platform like Converge and determining was it worth it on their own terms. We know not every brand had a strategy for Twitter during the Super Bowl but if you are going to spend $5 million on just the ad spot (no telling what it costs to create it) then you need to give it as much life as possible and social is an easy place to start and finish!

Like what you learned above? Then head on over to convergehq.com and learn a little bit more about us and start a 30-day trial!